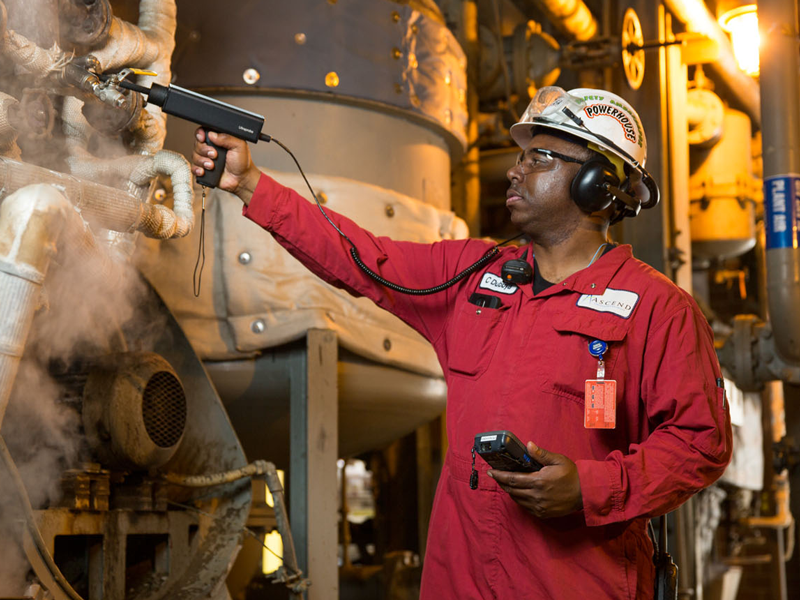 Until recently, it wasn’t unusual to see energy recovery operator Cedric Watson walking around Ascend’s Pensacola plant with an $8 stethoscope hanging from his neck and a yellow legal pad in his hand – the tools he used every day to inspect and keep track of the plant’s more than 5,000 steam traps.

Today, he uses a hand-held computer and a high-tech probe that resembles a speed radar gun. The tools, particularly the hand-held computer, have standardized and improved steam trap inspections, saving the plant thousands of dollars in reduced energy costs.

The plant’s utilities department decided about two years ago to do a sweep of steam traps and develop a trap inspection program to help improve steam efficiency. Past surveys performed by an outside company found that the plant was losing $500,000 to $800,000 a year in energy savings because of faulty traps releasing steam.

Thanks to Watson’s efforts, Pensacola is on pace to save nearly $1 million in reduced energy costs from steam trap repairs this year alone.

“Cedric is a trailblazer because he is the only person onsite with this expertise,” said Mark Haston, the plant’s power utilities operations leader. “He stepped up and was willing to learn the capabilities of the hand-held computer to help the company save money. He took ownership of the trap inspection program.”

Steam traps are designed to get rid of condensate without letting steam escape from the system. When traps leak steam, the plant must produce more steam, which requires burning more natural gas. That makes energy costs go up.

The hand-held computer enables the plant to inspect traps more frequently – every three to six months instead every two to three years. This means faulty traps are identified and repaired sooner, helping the plant to save money.

Watson, a 15-year plant team member, led a continuous improvement team in identifying and repairing steam traps that were costing the plant the most money in lost steam. He then surveyed the plant’s traps, verifying each trap’s identification number, location and operational status, and entered the information into the hand-held computer.

Next, he developed trap rounds, programmed them into the device, and worked with his team to pilot the use of hand-held computers in the plant’s powerhouse. He also went through company-paid training to become certified in the use of the high-tech probe, known as the Ultra Probe 9K. The probe verifies performance by enabling the operator to hear inside the trap.

The company recognized Watson for his leadership on the project last year. He now trains plant team members in other areas how to use the computer and the probe to do their own trap inspections. The plant has 96 hand-held computers and one probe.

“It makes me feel good to know that with every steam trap leak I detect and repair, I’m not only ensuring my future, but also the company’s future,” said Watson, a father of three.

No longer a time-consuming task

The hand-held computer improves the inspection process by keeping an inspection history of each steam trap and alerting the operator when a trap is ready for its next inspection. It also tells the operator where each trap is located and what to check for.

Watson, the plant’s main trap surveyor, said it now takes only 45 minutes to inspect a trap round of 100 traps compared with the nearly two hours it took without the hand-held device. Before, he would have to search for each trap, take handwritten notes on each inspection, and then enter his notes into a spreadsheet on his desktop computer.

“It was a time consuming task,” said Watson, who has been on top of every building at the plant to inspect steam traps. “The hand-held computer and probe have saved me a lot of time, and will save the company lots of money.”

He said he looks forward to sharing the new practice with other Ascend sites, and encouraging team members to find ways to do things better for the company. Other site operators are already seeking his advice about how to best do traps rounds. The project, he said, gave him an opportunity to be creative and collaborate with his team members – two activities he enjoys.

His supervisor Chuck Langham describes Watson as a self-starter who came up through the ranks as an operator. He has a drive for results, an attention for details, and an ability to teach others, he said.

“He’s just a value to Ascend, and I’m glad to have him on my team,” Langham said.